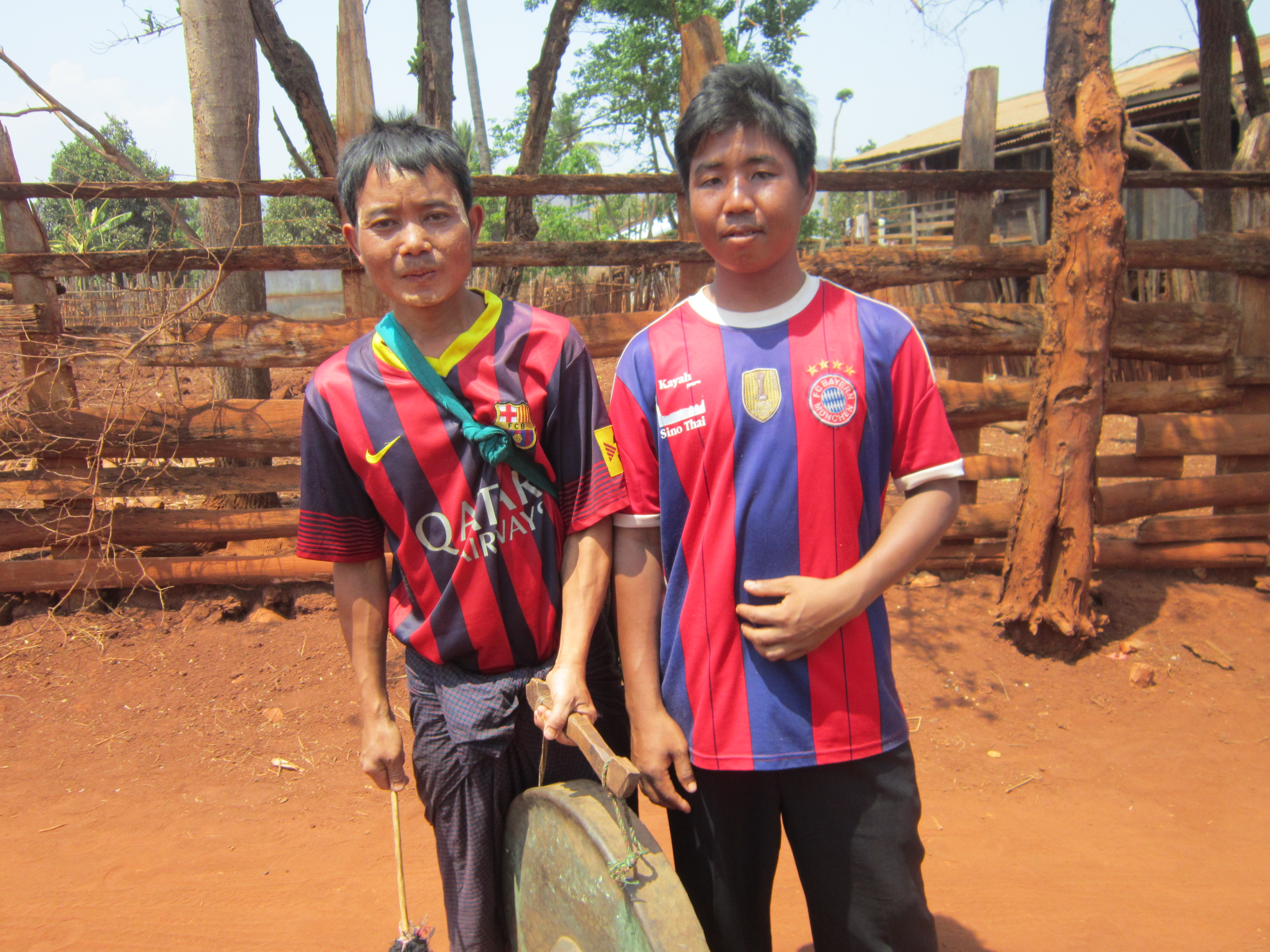 The trip to Loika was an odd one.  We were transported by  boat down through Inle lake all the way to through to what I think was Pekon, i’m not completely sure but essentially after going through Inle we then went through very narrow river to reach another lake and then crossed that.  It was quite surreal at times passing through fields on both sides as the water was very low!  Very hot as well, it was a narrow boat with 6 seats in a row for us and then 2 boat drivers, one at each end.  It was nice to see so much local life away from the tourist hotspots and the landscape was beautiful in places. For a better idea take a look on google maps at where Inle Lake is and the where Loikaw is, you can get a rough idea of the route we took.

We stopped at the bottom on Inle lake to visit a temple which was pretty cool, it had a lot of pagoda’s and in the main temple section there were some Buddhist women pilgrims engaged in a fascinating chant.

I’d headed down with the most of the group i’d trekked from Kalaw and explored Inle with.  My input into planning and been minimal, I basically just went along for the ride so I can’t tell you much about the organisation over than it was assisted by the Song Of Travel Hostel in Inle and we left our bags there and returned there after.

At the end we then met Joseph who was to be our guide. I don’t think he was used to having backpackers such as us, we made it clear we were only interested in meeting tribes but he still insisted on showing us a famous dam and also a famous temple in the area. He did give a lot of useful information though and I appreciated that but he did seem rather unorganized

The day we met him we went straight to see a ‘Longneck’ village. The Kayan people are famous for (some) of their women wearing gold rings around their neck.  Unfortunately his has been exploited over the years and there are many in places such as Northern Thailand or Inle Lake living away from their homes in what many people have described to me as ‘human zoos’.  The situation(s) in Myanmar’s past have led to many refugee’s fleeing to Northern Thailand and their has been past controversy around the use of ‘longneck’ women in tourism.

We saw this as an opportunity to meet the ‘real’ Kayan people, in their home villages. However it soon became clear that whilst some women do still wear the rings for cultural reasons, which was very interesting to see, they are very poor and the impression was that they are starting to become reliant on tourist income now that this area of Myanmar is open to tourism.

Before we got to the village we stopped at a few shops that had been set up. Each stall had 1 Kayan women wearing the rings working it. They were weaving cloths and so forth.  We were encouraged by our guide and the few men there (who we had to pay a small entry fee to) to take as many photos of the women as we liked.  Some of our party bought a couple of the things the women had made.  The area had very much been set up so people could come in, see the ‘longnecks’, maybe buy a thing or two, and move on.

The guide arranged for the women do perform a traditional dance for us, with a man playing a traditional Kayan guitar.  To be honest I just felt really awkward watching it.

After this we headed down to the village.  There was a few kind of ‘shops’ set up which had one or two people working them, and then the houses and so forth.  These people are clearly very poor, and  felt a bit torn as on one hand it does seem a bit like it is being set up just to bus tourists in and out but on the other they do need to make money and there are certain other activities which go on in the region (which I won’t discuss on a public blog) and i’d much rather they were involved in tourism than those.

We met Mu Pran who was a really interesting character. She played a homemade guitar for us.

We also met the oldest woman in the village.

All in all it was a very different experience to other tribes/villages i’ve visited previously.  Normally people were excited to see you or at least you had a host family who made you feel at home, but this just felt a  bit strange, I feel a bit sad when I think back to it.  One highlight though was a couple of girls from our group started playing sort of hide and seek or tag with the village kids and they are really loved it.

That night we had a bit of trouble finding somewhere to stay in Loikaw but eventually found somewhere that was ok, a pretty run down hotel but we didn’t need much.

The next day we headed off to see a Karenni village and meet the people there.  They were very happy to see us, we felt much more welcome.  It was a festival so there were many people from sounding villages too, and they put on displays in the village communal area.

Unfortunately I started to feel a bit unwell…something that became a common theme not long after (see my previous blog post about having to halt my travels for now due to sickness) so I couldn’t properly enjoy it as much.

Among the celebrations were animistic rituals….as a vegetarian who was feeling a bit unwell it was a bit difficult seeing so many chickens being slaughtered and a gutted pig being paraded around!

We stayed at one of these ladies house. We were given food and tea and made to feel very welcome.  There was plenty of pictures taken as neighbors wanted to pose with us and take some for themselves!  Whilst there I also chatted to one of her son’s who worked away from the village and was back for the festival, lovely guy. We must have spent a couple of hours having tea and snacks and posing for photo’s and chatting etc.

After this people headed up to the main communal area. I got to see some of the festivities before deciding to rest up. Illness wise it was just a combination of fatigue and stomach issues but in hindsight it was probably the start of my health’s decline which ended my trip (i.e. a different illness made me come home, but I think my immune system starting taking a battering around then).

Anyhow people from other villages came and paraded with their flags around the central building. There was water being thrown. It was cool to see the different dress that the different villages had.

This went on for awhile, and like I mentioned I felt a bit ill so I skipped much of it and just hang out at our host’s house.  We did pose for a picture with some of the locals so that was cool.

We headed back to Loikaw to stay the night again.  On the way our guide insisted on stopping to show us the famous Buddhist monastery in the area. It’s built into the side of a mountain and is lit up with lights at nighttime. It gives some good views over Loikaw.

The journey back the next day was one of the worst i’ve endured.  We were on a cramped, ram packed local bus for over 6 hours with very uncomfortable seats and essentially no room to move. But we got back to Inle lake eventually!

Had a look at the Buckingham Palace yesterday #visitlondon #visitengland #royal
Portrait of Susanna Lunden / Le Chapeau de Paille - Peter Paul Rubens, circa 1622-1625. On display in the National Gallery in London. #art #portrait #rubens #nationalgallery #visitlondon
Sunflowers - Vincent van Gogh 1888. On display at the National Gallery in London. #art #vangogh #visitlondon #nationalgallery
'A Concert' - Lorenzo Costa, circa 1485-1495 CE. On display at the National Gallery in London #art #nationalgallery #visitlondon #visitengland #music
Great to visit the Tower Of London today. Joined the tour to learn about some of it's bloody history and then had a good look round ourselves! #london #england #visitengland #visitlondon #londonhistory #travel #instatravel #toweroflondon
Great to visit the SS Great Britain in Bristol yesterday. It's somewhere I've been meaning to visit for years and I'm glad we finally did, great museum with loads to see. The ship itself was designed by the famous civil engineer Isambard Kingdom Brunel. Constructed in Bristol it was completed in 1845 and was considered a huge technological breakthrough, being the first ocean going iron ship to use a propeller. The museum tells of its service as a passenger ship, including taking migrants to Australia, and later as a cargo ship. And also how it was scuttled in the Falkland Islands in 1937 before finally being salvaged and returned to Bristol in 1970. #visitbristol #visitengland #history #ship #isambardkingdombrunel #historicsite #travel #instatravel #travelblogger #britishhistory