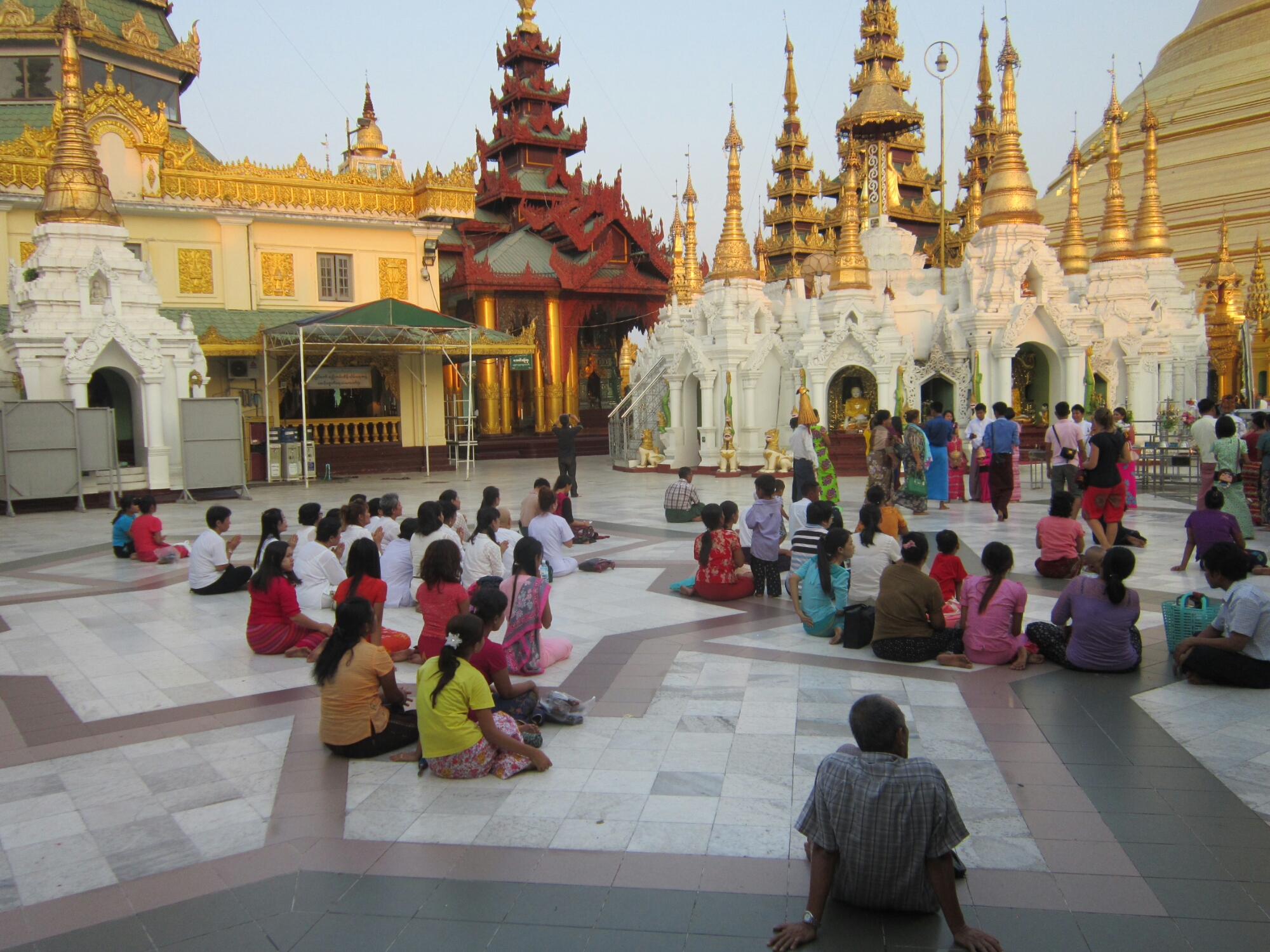 Here’s some simple advice for visiting Buddhist temples and respecting Buddhist beliefs. It’s designed to help those planning to travel to Southeast Asia for the first time. I’ve put it together based on my personal experiences.

Some general advice first that applies to everywhere in Southeast Asia.

Don’t point at anything or anybody with your feet as they are considered the dirtiest part of the body and it will be seen as an insult!

Don’t rest your feet on a table or anything similar. Again, as the feet are considered the dirtiest part of the body this is seen as very rude.

Don’t touch anyone’s head as it is considered the holiest part of the body and therefore will also be seen as an insult!

Don’t step directly over anyone as it’s considered disrespectful.

If you wish to take a photograph of a person make sure you ask them first. They may decline – do not take this as an offence, it may be for a variety of reasons from religion to politics to personal taste.

Don’t kiss or show a lot of affection in public. A hug is generally fine, and holding hands also, but public make out sessions are a big no!

The image of the Buddha is very important and must be respected.

You must not tattoo the Buddha image on you body.

There have been cases of people being prosecuted for having a Buddhist image tattooed on them. If you have such a tattoo keep it covered at all times.

You must not use the Buddha image in a disrespectful way.

For example using a Buddha statue as a doorstop or using the Buddha image as decoration on clothing would both be offensive. It should not be used to promote a non-religious event either.

Do not treat Buddha as merchandise.

You should not buy or sell Buddha images. You may see them on sale in shops, where the vendors justify it as selling to Buddhists for use it temples or other religious purposes, but if you are non-Buddhist it will be frowned upon. When visiting Buddhist temples it is important to follow the etiquette so that you don’t offend anyone (or get asked to leave!) and enjoy the experience without any awkwardness.

Firstly, cover up! This doesn’t mean you have to dress super conservatively, it just means make sure your shorts go to at least your knee and your shoulders are covered. And don’t wear any ‘revealing’ tops!

Some temples will offer coverings, sometimes at a small rental price, but you should generally carry something with you just in case.

Secondly, remove your hat and shoes! The big temples will likely have either have places to leave your shoes or your see a pile and can just add yours to it. It if isn’t obvious then generally just take them off and leave them at the entrance. In some place you will also need to remove your socks (Myanmar in particular).

Occasionally you will need to carry your shoes in a bag – this should only be done if it’s obviously ok to do so…an example would be the huge Shwedagon Pagoda in Yangon (Myanmar) as there are multiple entrances.

Thirdly, respect the Buddha statues! Don’t turn your back on them, don’t point at them (this goes for feet and fingers….in fact don’t point at anything in a temple), don’t climb on them or touch them. And the no pointing rule goes for when you are sitting down too! Cross your legs as to avoid this or bend them to rest on your knee’s with your feet pointing away from the Buddha.

In regards to photography in a temple I found it’s generally fine unless stated otherwise. As always pay attention to what other people are doing in the temple.

Remember if you are posing for a photo in front of a Buddha statue then that means your back is turned on it which is disrespectful! I have seen people posing to the side of statues and whilst that didn’t seem to bother anyone you might be wise to exercise caution nevertheless.

And lastly some more general rules:

Make sure your phone is on silent as not to disturb anyone else.

Be quite and calm as you would in any other holy place.

Don’t step on the threshold as you enter a temple, step over it.

Don’t eat or drink on the temple grounds. It is important that women do not touch a monk as that is forbidden in Buddhism. A man should not touch a nun either (though I did not see many in my time there).

Only use your right hand if giving or receiving something from a monk. This is generally advisable with everyone, but monks particularly so.

If a monk is sitting down then you should sit down too before you start a conversation with them.

Don’t go anywhere alone with a monk especially if you are a woman! Not all those dressed in robes have honourable intentions. Be careful.

It is forbidden for a monk to ask you for money. If one does politely decline and move away from them. If they are persistent then it is advisable to either leave or seek assistance.

Don’t sit in the monk only areas! Watch out on trains and busses for seats reserved for monks only.

Don’t disturb the monks when they are at their prayers!

You will often see locals personal shrines outside their homes or areas of work, for example in a  hostel or guesthouse. These will often have incense or offerings, particularly in Laos where Buddhism is mixed with local beliefs in spirits. Don’t touch these shrines or take photos of them. You will upset whoever maintains them. Some of the gifts may seem odd, for example a can of coca cola might be left if the spirit favours the colour red. So maybe it will inspire you to learn more about the beliefs?

The above advice obviously concerns Buddhist beliefs. But of course you will encounter other religions as you travel though South East Asia! Notably Islam, Hinduism and varying Animism beliefs. The key I find is to observe others and don’t be afraid to ask! Images:
The header photo is from Shwedagon Pagoda in Yangon (Myanmar)
The photo directly under the ‘Temples’ heading is from Krabi town (Thailand)
The photo of the 2 novice monks is from the ‘monk chat’ by Wat Chedi Luang in Chang Mai (Thailand)
The last photo is advice found in a temple in Sukhothai, Thailand.  May temples in Thailand will have words of wisdom hung around the temple grounds. 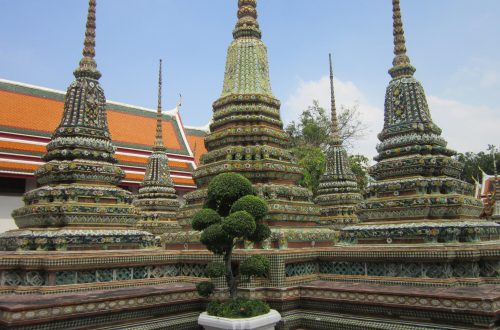 Travelling as a Vegetarian In Southeast Asia – An Overview 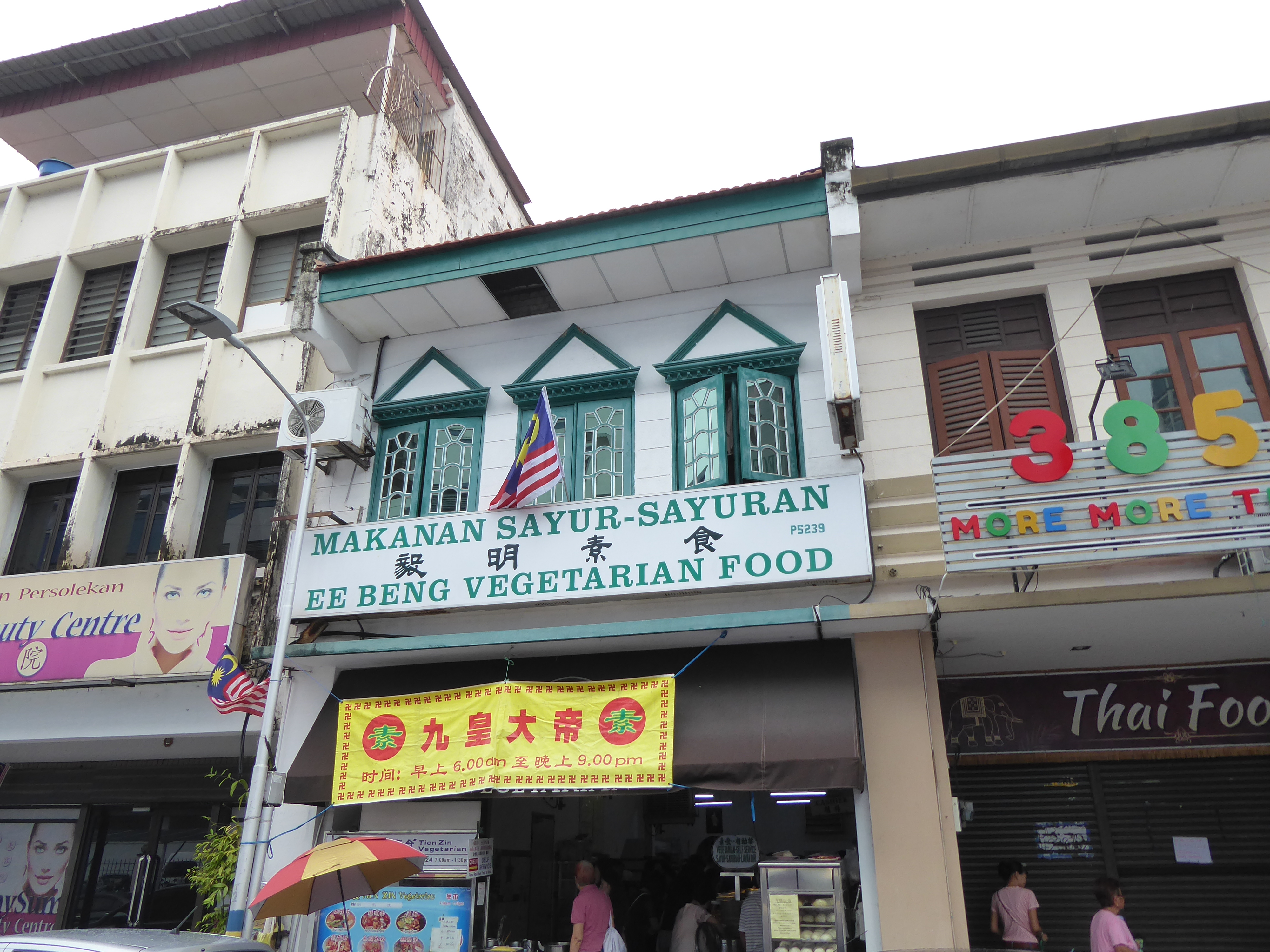