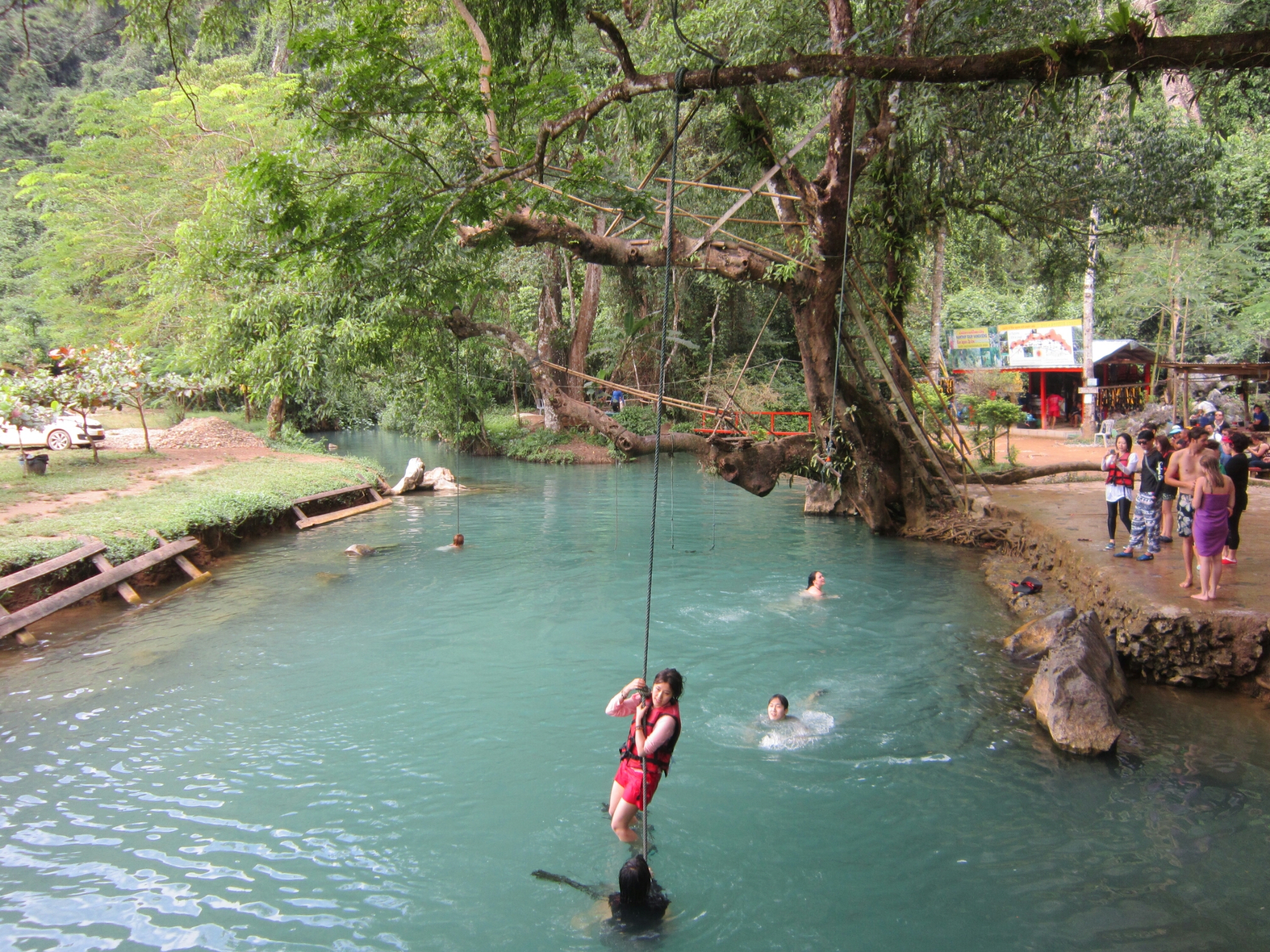 Vang Vieng is known as somewhat of a party place for backpackers, and I now understand why!

First off I was staying at Real Backpackers for 2 nights, which is a real party hostel, full of other English people. Honestly I saw more people from England than I did anywhere else in Thailand or Laos! Not that I mind seeing other English people of course it’s just we get a lot more battered a lot quicker than everyone else it seems, which can be tough on the body. I am getting old after all 😉 Breakfast time was essentially hangover central with music already being played at a higher volume than most hungover people can deal with at 9am. I mean Dre is great and all but at 9am, no. At Real Backpacker’s I also saw Claire who I’d met in Laung Prabang which was cool so we hung out on my first day and met Team Henry for food and drinks, though she moved on after that. Also met a couple of cool English people and an American girl there who I ran into later in Laos (Emma, Andy and Maya). I moved to Pans Place for my 3rd night, which was much more chilled out. Had a lot of fun there. A few of the Henry group were at Pans as well so that was nice, plus these 2 Finnish punks who were really sound guys.

So Vang Vieng has a couple of things around the town which totally stand out. Firstly the restaurants advertising ‘Space’ in flashing colours…these places have special ‘happy’ menus which was kind of crazy too see! Interesting use of pizza! And there’s the Friends bars. And yes I do mean Friends the TV show! You can sit and watch Friends all day, every day, in several different establishments. Spotted a couple places playing South Park too.

There’s a few bars there, the most infamous bring Sakura bar with it’s free t-shirts when you buy a couple of drinks, which are imprinted ‘Drink Triple, See Double, Act Single’. Spend some time in Laos and you will frequently see this T-shirt. The bar is pretty crazy, a mix of Western backpackers, Asian travellers/holiday makers (had my photo taken by a Thai couple after I complimented the girl on her Nirvana t-shirt) (also Korean people party hard), locals and ladyboy prostitutes with ‘aggressive sales techniques’ as I dubbed it. Me and every guy in that club now know how bad it can be for girls in Clubs after that experience, being groped by them when walking past was crazy weird and there was a lot of ‘what the fuck just happened dude??!!’ being exchanged by bewildered guys. On the same street is Gary’s Irish Bar which is pretty good, plus they played The Smiths over the sound system so bonus points. There’s an after club which seems to to rotate nightly where everyone drunkenly piles into and dances the night away.

So after my first night in Sakura bar, I was pretty hungover. Me, Emma, Andy, Maya and a deadlocked dude named Casey from New Jersey headed to the Blue Lagoon, which wasn’t great but it did have a point to jump from and Casey and a couple of other guys were doing some impressive flips into the water. It was really sweet at one point where a Chinese girl went up to jump with Casey, she was so scared but eventually jumped holding hands with him and we all applauded after and they poised for pictures. Next up me and Casey went to meet the Henry’s to go the tubing. Tubing is basically where you sit in a rubber tube and float down the pretty shallow river for a couple hours enjoying the scenery (which is splendid). Pretty harmless right? Well apparently not, see there’s 5 bars along the river and asides from the last they were all closed because yet again someone had recently died. It used to be really bad but in 2012 the government stepped in and ripped a bunch of bars down. The problem was people were getting too wasted and many died, because the river is so shallow and jump from a rope swing and chances are a rock will do serious damage to you. Plus coming off at the end was pretty hard, so it you’d spent all day drinking and it’s got dark that could be a struggle. Anyway enough doom and gloom, I did it sober and it was fine, though a little cold at the end.

Pro tip: no matter how good you think the wetbag you have is, don’t take your phone tubing. I now need to buy a new one….

After that we Henry’s all went for food and then a couple hours of Friends. Then later on I decided it was pointless trying to asleep early (as in before 1am…) in a party hostel so stayed up and sober, chatting to people then going to Sakura/after club for a bit….which was hilarious as a sober person (plus easier to dodge the aggressive sales techniques).

My last day in Vang Vieng was my favourite. After moving to Pans Place me and Michelle went to a vegetarian restaurant where I had an amazing pasta salad, before I then walked across the bridge to the other side of the river, past bungalows into the rice paddy’s and to a hill which I climbed to enjoy an amazing view of the mountains that provide Vang Vieng with it’s stunning backdrop. I was up thereby myself for about 90 mins, just relaxing and taking it all in. Afterwards I walked through the fields as the sun set and it was really nice. I was in a really happy peaceful mood after this and it was a lot of fun just chilling out at Pans in the evening.

So next up, Vientiane. To be honest it didn’t feel like there was much to do there, other than get a Vietnamese visa from the embassy.

There was a cool looking triumph arc, very French. The COPE Visitor Centre is small but moving, really sad to see all the stories of amputee’s, many of them victims of the ‘Secret War’, which was the USA’s bombing campaigning in Laos during the Vietnamese war, and the unexploded ordnance remaining from it. Friday evening by the Mekong there were hundreds of people doing aerobics to loud cheesy dance music, which was cool to see.

I also got some more great pasta! There’s a lot of varied restaurants around if you look for them, I met an English girl named Katie in our dorm room and we went to an Italian nearby, also had Somme good Vegetarian Japanese food somewhere me, Michelle and Nadisha found.

So Vientiane was where I said goodbye to the Henry’s. Ülie had left Vang Vieng a day earlier and I said farewell to the others as we all went our separate ways from there. Was really cool having a such a group to travel with for awhile. But now, onwards!! 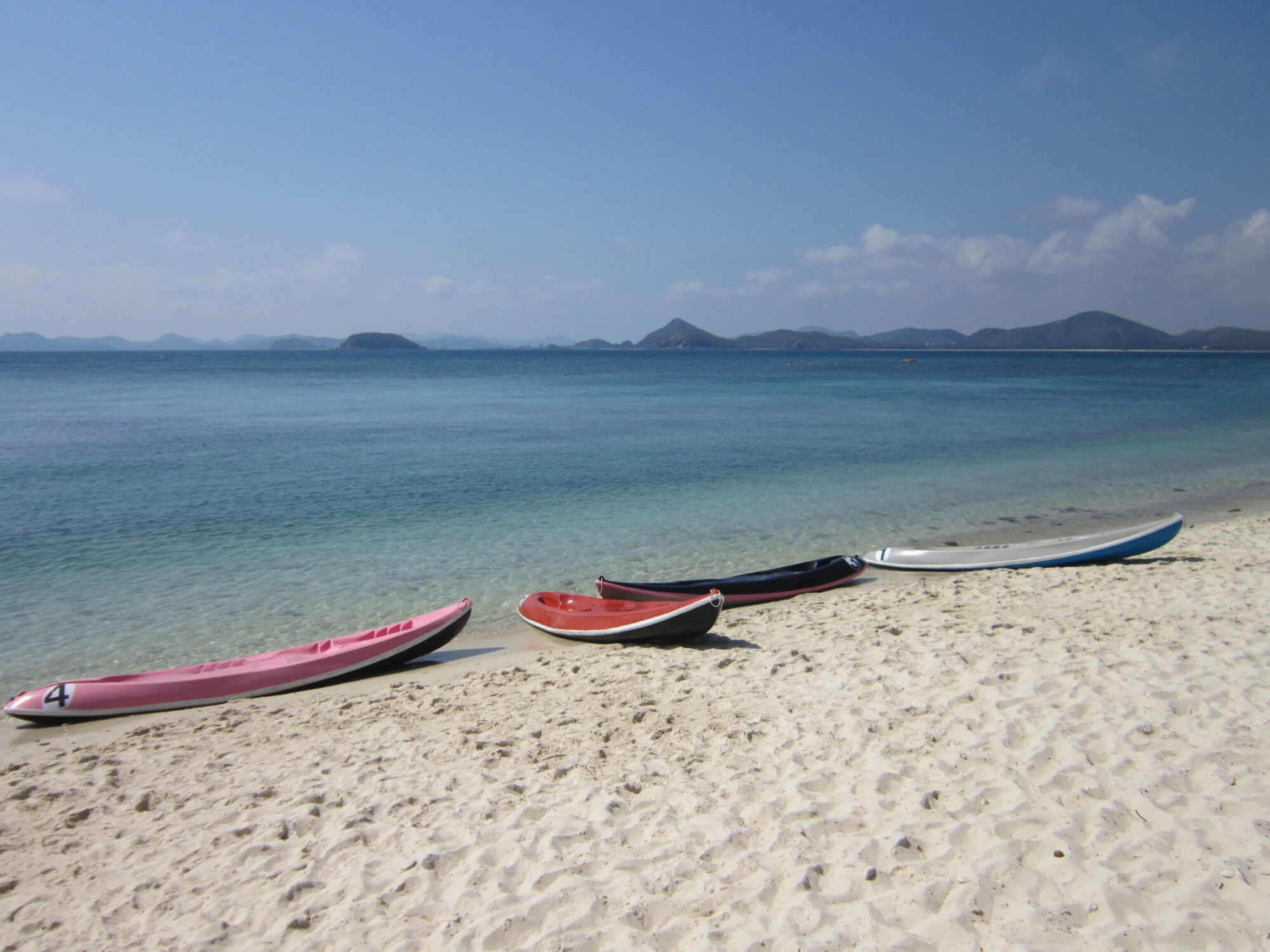 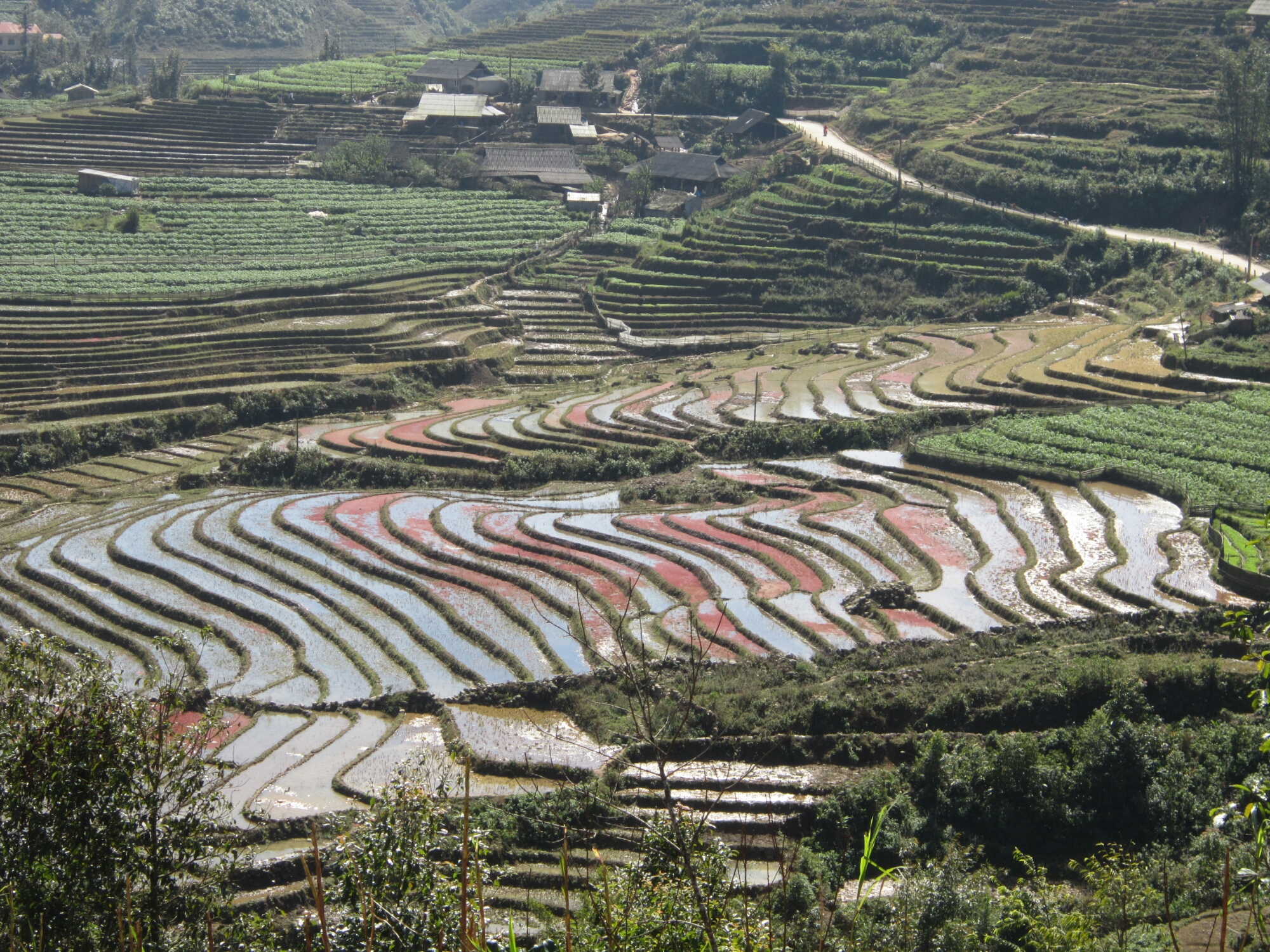 Phnom Penh including S21 and The Killing Fields – Cambodia 2016